Sri Swamiji expressed happiness in the development in the Ashrama. The new “Shobhanadri Hall” – an air conditioned culture complex has been completed.

“Some persons ask whether Swamiji creates anything. Swamiji does not do anything against nature’s law. Some say that Swamiji drove a car without petrol, but Swamiji does not do such things always. If one has a revolver, should one go on firing always? One uses it only when one is in danger. In the same way, miracles may take place as and when necessary.” 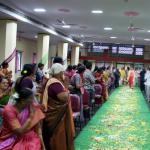 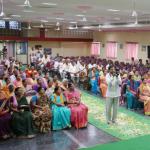