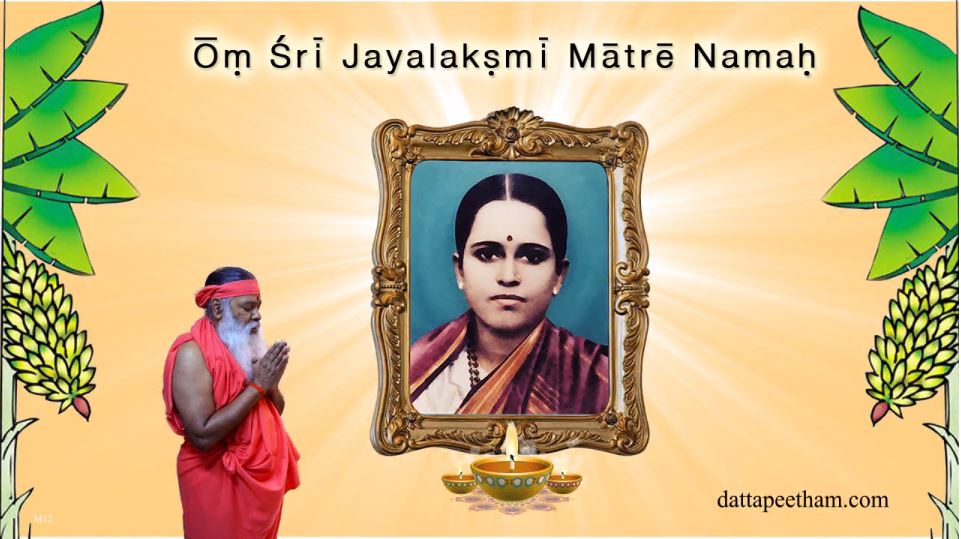 Mata Jayalakshmi is the mother and guru of Sri Ganapathi Sachchidananda Swamiji. Her gurus were Fakir Tatha, a Muslim saint, and Karapatra Swami. While a disciple of these gurus in Mekedatu, Mata Jayalakshmi experienced a divine vision of Lord Dattatreya Who informed her that he would take birth in her womb. Mata Jayalakshmi lived the life of an exemplary wife and mother with her husband, the late Narahari Teertha Swami in Bommeparti. As described in her words in Swamiji, The Manifestation:


“When I came to accept this auspicious and ancient institution (marriage) I found that each work I did in my house was spiritual exercise. Cleaning the cooking vessels, utensils and drains in and around the house was also upasana (spiritual practice) to me … Unfortunately, people have forgotten that righteous and virtuous duties were created by God, and that to do one’s own duty is a sacrifice, a scared yajna (ritual). Managing my family is my own duty and it is an act tantamount to religious sacrifice .”

Goddess, Rajarajeshwari. As written in Swamiji, The Manifestation:


“His mother was now dressed in a green sari and she was bedecked in extraordinary gems and ornaments. She was seated on a golden throne decorated with nine different precious stones. At Jayalakshmi’s feet countless swans appearing in a subtle form began to gather. In his mind, Satyanarayana made circumambulation around the glowing feet of his Mother as he would for the Divine Mother. His spirit then merged with the swans taking refuge at her feet and he lost all sense of himself”.

Mata Jayalakshmi concluded the initiation with 12 maxims to guide Sri Swamiji’s spiritual practice, They are: